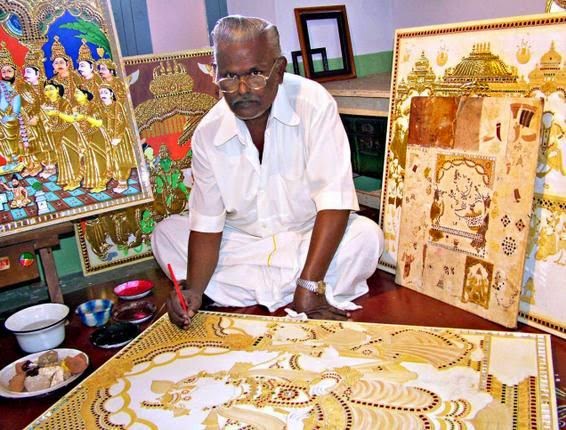 A Tanjore Artisan at Work

Tanjore paintings were painted by 'Moochys or Artists of India' according to the British chronicler Charles Gold in his book Oriental Drawings published in 1806. Traditionally, it is well known that the Raju community of Thanjavur and Tiruchi, also called as Jinigara or Chitragara and the Nayudu community of Madurai were the artists who executed paintings in the Thanjavur style. The artists (Rajus & Naidus) were originally Telugu speaking people from the artistically vibrant "Rayalseema" region of Andhra, who moved to Tamil Nadu in the wake of the fall of the Vijayanagar empire and the establishment of Nayak rule in Madurai and Thanjavur.

The artists turned out a wide repertoire of paintings on different subjects and of varied quality depending upon the patron's interest, urgency and most importantly influence and financial capacity. However, the art was by and large a sacred task to be performed with a reasonable degree of ritual purity and humility by the master craftsmen, many of whom chose to remain anonymous and never signed their paintings, true to the Indian artistic tradition. However a few works signed by the Thanjavur artists are also known. C. Kondiah Raju, the famous calendar artist from Kovilpatti, was one of the illustrious descendants to make a name as an artist during modern times from the Raju community.
Back to Blogs
Categories :
Tags :

We are now delivering to all geographies
For India, US & Canada - orders can be placed directly on the website
For others, please get in touch with us for placing orders
Added to cart
View CartClose
- There was an error adding to cart. Please try again.
Close
Deleted from cart
- Can't delete this product from the cart at the moment. Please try again later.